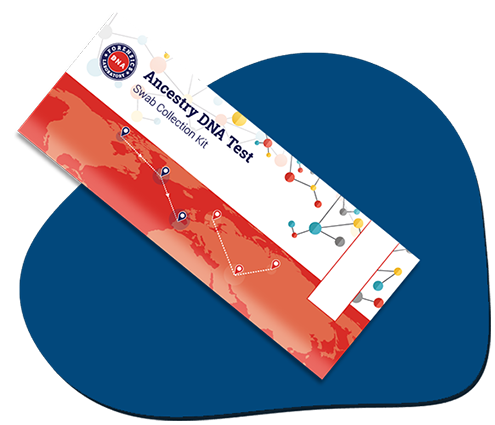 GPS Origins DNA test is the most advanced ancestry DNA test right now. It traces your DNA back around 1,000 years, or more, to the place where your DNA originated. DNA Forensics Laboratory Pvt. Ltd looks at your genetic markers to determine your ethnicity and the journeys of your ancestors. GPS Origins DNA test is the only DNA test with bio-geographical targeting capability to the town or village level and identifies when and where your DNA was formed by matching the populations that came together to create a genetic line leading to you. It also provides detailed stories helping to explain DNA mixture events such as wars, famines, and migrations.

Get your GPS Origins DNA test kit today for only Rs.17000

It is the Only Test You Need! Taking a GPS Origins DNA test gave me a better understanding of my background and genetic markup and led me to discover new relatives. I recommend DNA Forensics Laboratory Pvt. Ltd

It is the Only Test You Need! Taking a GPS Origins DNA test gave me a better understanding of my background and genetic markup and led me to discover new relatives. I recommend DNA Forensics Laboratory Pvt. Ltd.

All my life was wondering why, who and from where I belong. To get the answers to my questions, I took the Origins DNA test and less than three months later, and I found my whole family. All pleasantly excited and happy to know and see me. I live in Halebid, Karnataka and they in Assam. But today we are connected only because of GPS Origins DNA test. Heartiest Thanks to DNA Forensics Laboratory Pvt. Ltd to help me in finding my loved ones.

I took the GPS Origins DNA test and was staggered by my number of matches across the world. A DNA test was precious for me as it enabled me to confirm the identity of my father's family. He was raised in an orphanage and never knew his parents. He died in 2002, and I used the GPS Origins DNA test from DNA Forensics Laboratory Pvt. Ltd to build a tree of his potential family and confirmed my research with DNA matches - a fabulous and fascinating outcome!

GPS Origins DNA has brought a lot of new people into my life. It's so fascinating to see the physical similarities between us and to get to know each other better. I'm excited to take that journey. I'm looking forward to continuing with DNA Forensics Laboratory Pvt. Ltd for other DNA testing services.

I bought an Ancestry DNA kit a few months ago and the results I got provided closure for some questions I had. Not what I wanted to be but happy I found out. The whole collection process was easy enough, and the result was provided in the best turnaround time. And Yes, I would definitely recommend this to a friend. 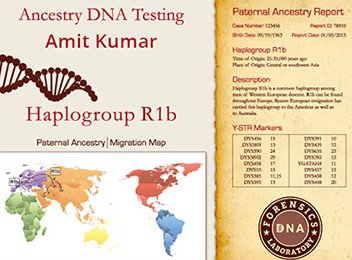 In the paternal lineage test, DNA is passed from father to son and relatively remains unchanged through many generations. The results of the Y chromosome test help you identify the geographic areas where your paternal ancestors settled thousands of years ago, as well as their various movements over time. 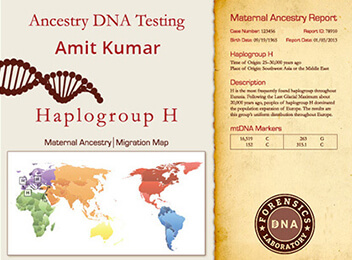 In the maternal lineage test, DNA is passed from mother to child and relatively remains unchanged through several generations. The results of the mtDNA test help you identify the geographic areas where your maternal ancestors settled thousands of years ago, as well as their various movements over time.

How does GPS Origins test differ from other DNA tests for ancestry?

Other DNA ancestry tests provide limited ethnic composition at the regional or national level. GPS Origins DNA test goes beyond the broad of ethnic classifications to identify your ancestral origins in a specific geographic location using an unprecedented number of gene pools and reference populations.

How does this test differ from other DNA tests for ancestry?

It is an autosomal DNA test, also called SNP test. It extracts markers from your Y-chromosome DNA, X-chromosome DNA and mitochondrial DNA.

There are four types of DNA:

This test examines nearly 80,000 of your autosomal markers (SNPs) and compares them to the distinctive mutations of 41 gene pools in more than 1,000 reference populations. This identifies where and when your DNA was last modified.

How accurate is the test?

The accuracy depends on your family history. If your parents come from the same place or from two different places and are not mixed, the test can trace your DNA signature in the country of origin in 90% of cases. The test will predict the accurate continent.
In a study of people from all over the world, the GPS Origin DNA test algorithm predicts continental origins with 98% accuracy, affecting 83% of individuals in their home country and, where appropriate, 66% of them to their area.If your ancestors came from Western Europe and your parents came from the same area and did not go far away from where they came from, the test places your DNA signature within 50 km of its true origin and often closer.

If I already have a DNA test why should I order the GPS Origins ancestry test?

Although we accept the results of other companies, we recommend using the GPS Origins DNA test. The GPS Origins DNA test includes many unique markers that cannot be found in other commercial tests. In addition, if you download raw data from another ancestry test, be aware that your advanced Autosomal results depend on the quality of their genotyping. Lower quality genotypes can affect the results of your GPS Origins.

What is the GPS Origins DNA test for ancestry?

The GPS Origins DNA test allows you to trace your DNA back around 1,000 years or more to the point/place where your DNA started.

The test uses 41 global gene pools to calculate the genetic signature of your autosomal DNA. Then, it compares your unique DNA signature to more than 1,000 populations worldwide (who we know have lived in one place for a long time) to locate the beginning of your DNA. In some cases, GPS Origins traces your DNA at the village or city level. Finally, it calculates two genetic lines by tracing the migration paths of your DNA, using its old signature that dates back in time.

How does the GPS Origins ancestry test work?

The test looks at the genetic composition of your DNA—your DNA signature—and compares it to a database of over 10,000 signatures from 1,000+ populations with known geographic locations to identify the place where it began about 1,000 years ago.

We have identified 41 gene pools around the world. Each human population is made up of a mixture of these gene pools. In the distant past, individual migrations were rare. Genetic mixing tended to occur when large groups of people moved from one area to another, through invasion or mass migration. As the incoming gene pool mixed with the local one, a new genetic signature was created across the whole population.

The GPS Origins test assumes that your DNA signature is unique to you but shares many characteristics with the populations or tribes from which it originated. By comparing your DNA to the signature mixes within different populations, GPS Origins can pinpoint the origin of your DNA.

The algorithm works out the differences or genetic ‘distance’ between your DNA and the DNA population signatures in our database, and converts them to geographic distances. Then, like a car satellite navigation system, it uses the distances to calculate the coordinates of your DNA origin, which marks the spot where your DNA most recently changed at the population level. It occurs when two different populations came together and created your DNA signature.

Using a similar method, GPS Origins then works backward to find two more points and plots the journey to where your DNA was mixed. It repeats this calculation for each element of your parental DNA.

What does the GPS Origins report include?

Your report presents the proportions of mixtures of 41 possible gene pools covering the entire world, as well as the history of primary gene pools. Your report also indicates the geographical origins of your DNA, which could be a country or closest to the nearest city. Your DNA signature was created when two different population groups mixed together and created a new genetic signature, the one you inherited.

You also see two migration paths for your DNA, one for each member of your family, to their place of origin, which may have come from more than 10,000 years ago. Finally, GPS Origins dates the age of your corresponding DNA signature when it has undergone a significant change in the population.

GPS Origins is a great tool to help you search your family tree!

What is a Gene Pool?

A Gene Pool, also referred to as Ancestral Origin, is the collective set of genetic information within a distinct region where populations had limited interactions with populations from outside the group for up to about 20,000 or 60,000 years. So far, 41 human gene pools around the world have been identified with each human population made up of a mixture of several such gene pools. In the distant past, genetic mixing tended to occur when large groups of people moved from one area to another, through invasion or mass migration. The GPS Origins test pinpoints the origin of your DNA by comparing it to the signature mixtures in different populations. Your personalized report shows the percentages of DNA you inherited and provides you with the history of the top three Gene Pools.

Will GPS Origins tell me where my ancestors originated?

GPS Origins ancestry test does not report the geographic origins of individual ancestors, but the geographical origin of your DNA. You can be certain that some of your ancestors came from these places within the period indicated.

I am mixed race. What will the GPS Origins test results tell me?

GPS Origins always reports the results for two lineages, which should roughly correspond to the origin of your parents. The test works best for people with DNA from no more than two different places; that is to say, people whose parents are from different places but are not themselves mixed. For people with more mixing, say, four grandparents from various places across the globe, the test will report the midpoint between the four places. The next generation of this DNA testing for ancestry will reveal the genetic origins for people with significantly mixed genetic backgrounds.

Can I get a hard-copy version of my results?

Yes, you will get hard-copy and online results.

Because this test is autosomal, paternal and maternal lines cannot be distinguished by name. But you can be sure one is your maternal line and one is your paternal line. Most of our customers are able to deduce which is which based on knowledge of their own family histories.

Get your GPS Origins DNA test
today for only Rs.17000

You'll also get FREE SHIPPING back to our laboratory for testing.