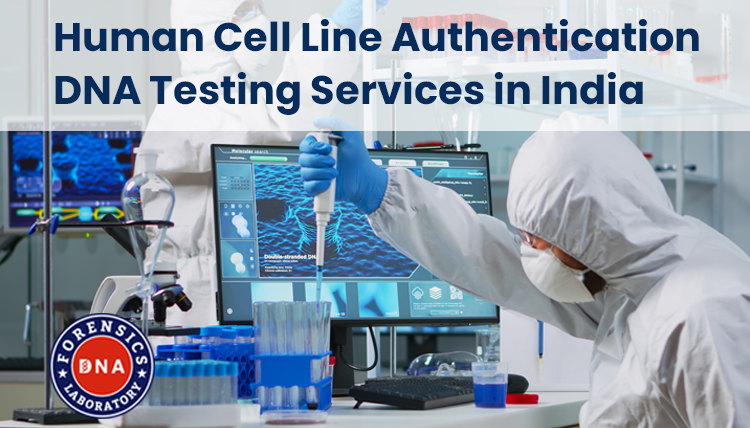 The advent of new technologies, and organizations involved in the distribution of biological materials, such as cell culture lines, has made it easier to access various in vitro models. They later got developed and/or harvested from different sources. Cell lines are essential tools for biomedical research and development. Since the early 20th century, animal cell lines have been used for medicine, genetics, cancer research, and drug development studies. Cell line authentication test in India is relatively straightforward: genetic profiling can be accomplished through polymorphic short tandem repeats (STRs). This technique produces reproducible data under the guidelines set by the leading scientific organizations, researches, etc. Then, the STR profile is generated by multiplex PCR followed by capillary electrophoresis on a genetic analyzer.

If you are looking for a cell line authentication DNA Test in India you are at the right place. Cell Line Authentication verifies the identity of the cells you use in your experiments. Testing often includes ensuring the cell lines are derived from the correct species and donor (the source) and are free from contamination.

Researchers have found that they have encountered failure after decades of research due to the lack of an accurate cell line authentication test. Oftentimes, a cell line of interest is misidentified at the source. As a result, it could have led the researcher to use the same (misidentified) cell line to conduct the research and ultimately not getting the desired result.

A second issue with cell lines is the possibility of cross-contamination, where the contaminant can be a different cell from another source/sample, environmental pollutants, etc.

The third and most crucial problem with cell lines is that they often become genetically drifted with time. During such a genetic alteration, a cell may lose its originality and become a totally different cell. Researchers and experts generally acknowledge that the latter is more harmful than the first two types of errors, as one may not realize that the cells are gradually changing and may continue to get false results.

When to Authenticate a Cell Line?

How to Authenticate a Cell Line?

STR profiling establishes a unique fingerprint of every human cell line (or any other species). STRs (or microsatellites) are about 2-10 base pairs long and are the hypervariable regions present in mammals, bacteria & fungi, as well as in insects, reptiles, and fish. STR profiling has the power to differentiate between different individuals of the same species. The number of repeats present at the STR loci in each individual varies and gives rise to a unique fingerprint. The ANSI/ATCC standard ASN-0002 has mentioned STR profiling as the preferred human cell line authentication method.

We are already working with esteemed Research Institutes, Pharmaceutical Companies, and Biotechnology Companies. Moreover, we are the only company that offers legal DNA tests in India. With 400+ collection centers across India, you can visit your nearest collection center to give your DNA sample. For further queries about cell line authentication tests in India, you can get in touch with us or schedule an appointment by calling on the following numbers.
Call: +91 8010177771
WhatsApp: +91 9213177771