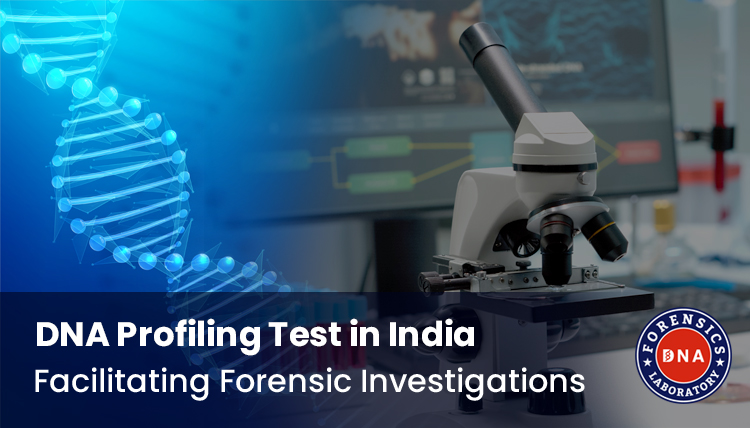 DNA or deoxyribonucleic acid is the genetic material found in living organisms, from bacteria to plants to humans and even viruses. It is the blueprint used to build an organism. The directions coded for by our DNA control everything from growth & development to cell specification, neuronal function, and metabolism. Human DNA is 99.9% identical to the DNA of every other human being on earth, but it varies from 0.1%. Although 0.1% doesn’t sound like a lot, it actually represents millions of different regions within the genome. These regions are called polymorphic. The variations in these polymorphic regions are called polymorphisms. Each one of us inherits a unique set of polymorphisms from our parents. These polymorphisms can then be analyzed to create a DNA profile. DNA profiling is also called DNA fingerprinting.

DNA Profiling Test is a systematic procedure beginning with the sample collection of the involved parties. First, the buccal swab made up of sterile cotton is used to rub against the cheek walls to collect the epithelial cells. Samples of blood, hair, and saliva can also be used to extract DNA. Next, the DNA will be cut for STRs (Short Tandem Repeats) analysis.

DNA profiling does not use restriction enzymes to cut down the DNA. Rather, it utilizes PCR technology to create thousands of copies of the STRs sequences.

After PCR produces enough copies of sequences, electrophoresis separates different sized DNA molecules. They are then passed to laser sequencing, resulting in a unique DNA profile. But in the case of identical twins, the DNA profiles can be the same.

Today’s society has civil and criminal uses for DNA profiling tests in India. DNA testing/profiling technology is extensively used in criminal cases, including corroborative evidence and DVI (Disaster Victim Identification) and civil matters, like determining kinship and establishing biological parentage. In addition, researchers are also using DNA profiling to calculate the possibility of genetic defects being passed on to future generations and detect genetic traits that contribute to diseases such as cancer, Alzheimer’s, and diabetes.

As a medical application, it is used to match the tissues of a donor and recipient in organ transplantation/donation cases. With the advent of newer methods of profiling & analysis, the use of DNA in various other fields will grow over time.

A DNA test can be used for many applications. Some of the standard DNA profiling tests in India include: 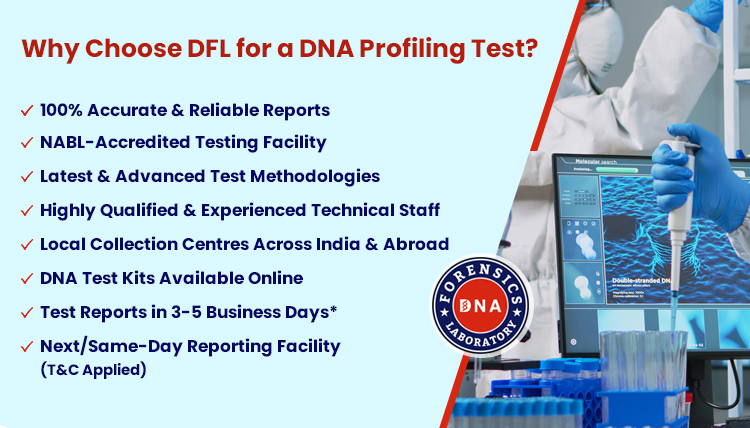 Why Choose DNA Forensics for the DNA Profiling Test?

DNA Forensics Laboratory Pvt. Ltd. is one of the leading companies/labs for an accurate and reliable DNA Profiling Test in India at competitive prices. With an excellent track record & thousands of satisfied customers, we are among India’s most trusted DNA testing labs for DNA Profiling.

Other Key Factors that Make us Best in the Field are: