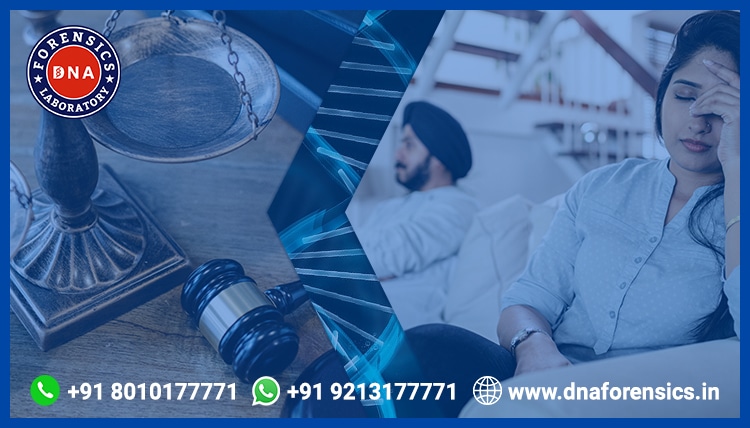 A recent verdict by the Allahabad High Court on October 21, 2020, said that a DNA test is scientific and the most reliable proof of asserting or rejecting the wife’s fidelity.

In India, private DNA testing is not new, and there are many companies doing peace-of-mind DNA tests for the public. As far as a legal DNA test is concerned, we, DNA Forensics Laboratory Pvt. Ltd. is the only private Indian laboratory doing a legal Paternity DNA test and various other court-approved legal DNA tests in India. A DNA test not only provides you your biological or genetic identity (also called a DNA profile, the process is called DNA profiling or DNA fingerprinting) but also helps identify the biological relationship between two individuals accurately and precisely.

While peace of mind DNA test, as the name suggests, is only done for one’s own information, a legal DNA test, on the other hand, is used as evidence in the court to prove facts related to one’s biological relationship, which in many cases serve as the ground for justice, like in case of infidelity.

The Judgment by the Allahabad High Court!

Justice Vivek Agarwal was hearing the case, in which the petitioner Smt. Neelam challenged an order of Hamirpur Family Court to go for a DNA test for proving her loyalty.

The petitioner Neelam challenged the decision made by the additional principal judge of Hamirpur Family Court, under Section 13 of the Hindu Marriage Act, 1955. The order came from the Hamirpur Family court on September 22, 2018, in a divorcee petition by the husband on the grounds of adultery.

In this case, if the wife would have agreed and undergone the DNA test for the paternity of her son (alleged to be born out of wedlock) and the alleged father, the test results would have annulled the paternity and, the wife would be blamed for infidelity/disloyalty/unfaithfulness. On the contrary, she was not in favor of and rejected the paternity DNA test for her son, it brought the fact into the light, the son was actually biologically unrelated to the alleged father. This meant that she already knew the facts (and hid the facts), and the same served as a base for the court to rule out her petition.

What exactly was the case?

The petitioner (the wife) Neelam was married to Ram Asrey on April 28, 2004, and the couple had three daughters from the wedlock. The husband has been affirmative that he was not living together with his wife Neelam since January 15, 2013, and has given his wife Neelam customary divorce against maintenance pay-ments.

Neelam gave birth to a male child on January 26, 2016, which Ram Asrey (the husband) was claiming to be born out of wedlock and blamed her for committing adultery.

Neelam’s petition lost ground, as she was opposing the court’s order for a DNA test of the child and the alleged father (Ram Asrey). The Allahabad High Court thus dismissed the case. The dismissal of the petition was also backed-up by a like-judgment of the Hon’ble Supreme Court in the case of Nandlal Wasudeo Badwaik V/S. Lata Nandlal Badwaik and another.

The dismissal was in accordance with the apex court’s statement mentioning that the court cannot compel the appellant-husband to bear the fatherhood of a child when the scientific reports prove to the contrary. Hence, the Allahabad High Court rejected the plea of the petitioner (the wife), not interfering with the order of the Hamirpur Family Court, dated September 22, 2018.

Is there an Authentic Government-Approved DNA testing Laboratory in India for Legal DNA tests?

DNA Forensics Laboratory holds an excellent track record for doing accredited DNA tests for various purposes. A legal DNA test is a piece of authentic evidence in confirming or rejecting the biological relationship between two people. Infidelity, though not criminalized (in the Indian Penal Code or IPC), is acceptable as a valid ground for divorce.

The following blogs contain general and specific information about the need, ap-plication, implication of a legal DNA test for paternity and others on an individual and society’s personal life.

Disclaimer: Various pieces of information of this blog are taken from the news published in The Times of India on Nov 18, 2020. This blog does not hold a view/opinion on the subject-matter(s) covered in its contents and is only informational (of the field of DNA Testing Industry) in nature.

2 thoughts to “DNA Test for Infidelity – A Legitimate & Reliable way to prove Loyalty within Marriages!”