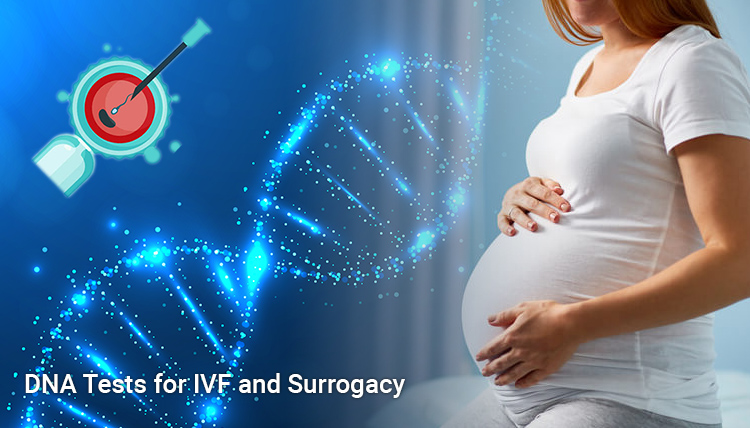 During the past decade and a half, the infertility rate has increased among the couples which is the main cause of an unsuccessful conception leaving couples unable to have a child. IVF, or In-Vitro fertilization is a widely accepted technique in the fertility-cum-maternity centers or hospitals, for giving such couples the opportunity to have a child of their own. The advancements in the lab technologies, and the DNA techniques have aided in the facilitation of in-vitro fertilization, surrogacy, and genetic identification of the babies through DNA Tests for IVF and Surrogacy Babies.

What is IVF technology?

The in-vitro fertilization or simply, IVF, is the process of fertilizing an ovum (the egg) with sperm in the laboratory environment, thus ‘in-vitro’, and surgically implanting the fertilized egg in the uterus of the mother. This is a form of assisted reproductive technology – ‘ART’, and is helpful for those couples, who for a variety of reasons are unable to have a baby naturally.

One of the most common reasons is the low sperm count, unhealthy sperms, which fail to fertilize or even reach the ovum to fertilize it in the ovary. Another reason is a lack of female hormones in the mother, called the ‘estrogens’, which aid in the attachment of fertilized eggs in the uterus and help in successfully carrying out the pregnancy. Due to these, and some other reasons, it becomes hard for the female to keep the embryo, and often leads to miscarriage.

IVF technology uses medicines and medical procedures, to fertilize the egg with the sperm, both collected separately from the mother and the father respectively. Once fertilized, the embryo is surgically implanted in the female’s uterus, where the embryo develops, and leads to a normal child delivery.

What is Surrogacy and how is it different from IVF?

Unlike IVF, surrogacy is rather a more sensitive area. In IVF, the pregnancy is carried out by the mother herself, whereas, in case of surrogacy, a surrogate mother’s womb is used.

There are two types of surrogacies – Traditional and Gestational Surrogacy.

Laws for Surrogacy Regulation in India

The lower house of the Parliament of India, the Lok Sabha introduced a Surrogacy (Regulation) Bill, which proposed that only Indian couples (heterosexual) who have been married for at least five years and have fertility problems, can use the surrogacy services. Initially the bill was lapsed, but later reintroduced by the Lok Sabha again, in 2019, and is currently withheld for presidential approval to make it a law.

Prior to 2016, India had many cities which were becoming surrogacy hubs, and lead to commercialization of the facility, as well as exploitation of the surrogate mothers.

India being an affordable option for foreign couples to find surrogates, the market shifted here quickly, and the surrogates as well as the surrogacy centers started neglecting the norms, which otherwise would be necessary for the sake of postpartum health of the surrogates. A gap of minimum four years was mandated between two surrogacies. Monetary benefits encouraged surrogates, and or their spouses/families to ignore these norms, risking their health and lives for more money.

The homosexual couples abroad found India an easily accessible site and a cheaper option for getting children.

All of these reasons were making the worst of the commercializing of such healthcare services, and led to poor health and morale among the surrogates and their relatives. A stringent law was strictly needed, for which the first Surrogacy Bill, 2016 was introduced.

In case of surrogacy, every process happens in a lab environment, therefore the only way to confirm if the child belongs to the intended parents is a DNA test. Further, an accredited DNA test report helps in many ways, like inheritance of property, immigration, etc.

Despite all the technologies, and documentation, there are possibilities of the samples (the sperm and the ova) getting mixed up, during the process of in-vitro fertilization due to human or machine errors.

At the IVF centers, hundreds to thousands of the samples are present awaiting fertilization and the implant. Sometimes the ARTs (Assisted Reproductive Technology centers) are a common place for both IVF and Surrogacy. Due to a large number of samples, and experimenting the in-vitro fertilizations in the labs, the samples may get mixed up for a variety of reasons, from wrong labelling of samples to procedural error during the process.

So it becomes very important to ensure the selection of an IVF center, which can offer a DNA test, along with other documents to confirm the genetic relationship of the parents, with the baby either after birth or before birth using a prenatal DNA test.

In India, we, DNA Forensics Laboratory Pvt. Ltd., New Delhi (DFL), are one of the most reputed private DNA Testing companies, offering accredited relationship and other DNA tests to the individuals as well as the IVF centers, in India.

Our testing facility is NABL accredited and we are the only private DNA testing company in India, offering accredited DNA testing services. We are not only serving Indian clients, but also offering our services in many foreign countries including the United States, the United Kingdom, Australia, Canada, Nigeria, Thailand etc.

We, at DNA Forensics Laboratory, are already providing DNA testing services for the intended parents and the child at many IVF centers across India.

With over 400 local and international centers, we have been the number one choice for a variety of DNA tests for different purposes including the DNA tests for the IVF centers in India for many years.

With our qualified and experienced technical staff and collection agents, we are reaching even to the remotest IVF Centers in India. To book the desired DNA test, one can reach on the following contact numbers. +91 80101 77771 or whatsapp +91 92131 77771.

2 thoughts to “DNA Tests for IVF and Surrogacy Babies”