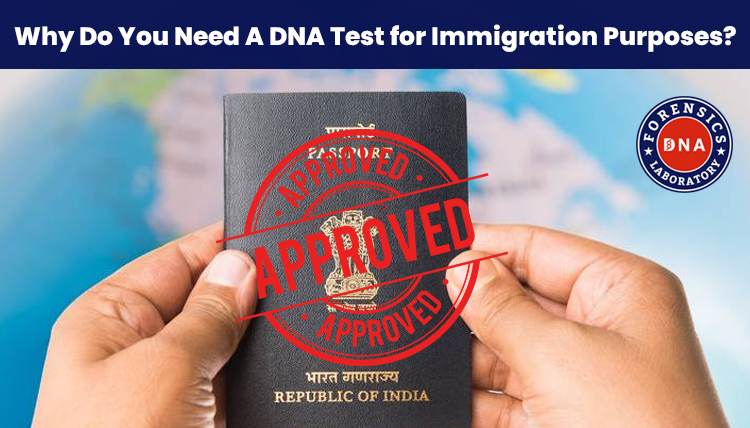 DNA testing technologies are being implemented in areas that extend beyond the field of medicine to address social and legal problems. An emerging example is the implementation of DNA testing in the family petitioning process in immigration policy. An Immigration DNA test establishes the biological relationship between the applicant (beneficiary) and the sponsor (petitioner). In addition, almost all countries now require a DNA test for visa applications. Therefore, it is recommended to get an Immigration DNA test in India to prevent the possibility of visa rejection.

Why is Immigration DNA Test Important?

Unchecked immigration may cause a lot of problems. The first challenge is for the applicant, who may get a refusal letter, ultimately delaying the visa approval. Getting an Immigration DNA Test in India before applying for a visa can significantly increase the chances of visa approval in one go.

Immigration DNA tests have been implemented in several countries to prevent illegal entry into the country as well as to prevent crimes like human trafficking, organ smuggling, and poaching. A DNA Test for Immigration in India is done for different types of relationships; for example,

In the immigration process, two parties are involved – the applicant and the sponsor.

Often the sample collection is done with a chain of custody. It means that the person to be tested has to visit the embassy of the respected country & give their DNA sample under the supervision of the immigration officer.

We use the swabbing method to collect our clients’ DNA samples. Buccal swabs are sterile cotton buds rubbed on your cheek walls from the inside of your mouth. It’s a painless method and yields 100% accurate results. Once the samples of both parties are collected, they are sent to our testing facility for analysis. After the analysis is complete, we release the report to the respective authority. The tested parties can also request a copy of their report.

Required documents for DNA testing for immigration purposes are – a photocopy of the govt.- issued photo ID proofs & the original for reference and 2 passport-sized colored photographs of each tested person.

We also provide Immigration DNA tests in India for Canada, Switzerland, Dubai, Germany, China, and many other countries.

Furthermore, we provide our customers with dedicated 24/7 DNA testing support. We have many years of experience and satisfied customers.

Our mission is to serve people by providing them with the most reliable, useful, and affordable DNA tests for immigration purposes. If you want to get the best Immigration DNA Tests in India, just call us at +91 8010177771 or WhatsApp at +91 9213177771 to schedule an appointment.